A Sporcle-ing opportunity for the holidays

We are pleased to announce that Who's Bigger has hit the world of Sporcle, the popular website offering "mentally stimulating diversions".   In particular, check out your sense of the biggest actors, actresses, and directors at http://www.sporcle.com/games/rockgolf/american-gravitas.

We thank Patrick Kelly for his interest and efforts in putting this together.  He is a very experienced hand at this: his Sporcle quizzes have been played more than 10,000,000 times!   He promises more Who's Bigger games on Sporcle in the near future, and we will let you know soon as they are available.

The results of the early responses has been quite revealing.  In particular, our most significant director has proven to be the hardest question on the entire board, being answered correctly by only 6.6% of the players.  And yet in their post-game comments, this question was called a "head-banger", which I interpret as a problem where you recognize the right answer soon as you are told.   This, to me, captures exactly what is interesting about our Who's Bigger rankings.  We generally reflect things that you know, but not necessarily what you know you know.

Patrick has just posted a presidential Who's Bigger quiz, which has already gotten some interesting comments.   Check it out at  http://www.sporcle.com/games/rockgolf/pulling-rank.

Posted by Steven Skiena at 7:38 AM No comments:

Who Reads the Papers?

We have been very gratified by the large volume of press interest in our book/rankings from news outlets in the United Kingdom.  I've personally been interviewed by the Sunday Times and the Daily Mail, and substantive articles have also appeared in the Independent, the Telegraph and the Guardian, plus an appearance on the Newstalk radio show with Sean Moncrieff (listen 35 minutes in).

This response has put to shame what we have received from American newspapers to date.  It is probably partially explained by the fact that Cambridge University Press is a British publisher, and presumably has better press contacts there.   But it also reflects the greater competition and depth of the British newspaper establishment, with a dozen or so newspapers fighting for circulation among the same population.   Not exactly the same.   Each newspaper there aims for a distinct audience, as shown in the comedy sketch "Who reads the papers?"

The truth of this came clear to me during my interviews.  The reporter from the Sunday Times sounded like Hugh Grant [6623], an Oxbridge-type whose accent made him appear more cultured and sophisticated than any human can possibly be.  By comparison, the reporter from the Daily Mail came across as a street-smart urchin banging out his text from the local pub.   When I corresponded with him the next day, he was trapped covering a court hearing in some (no doubt) tawdry case.  But I must credit him on his very fast work.  We talked only 15 minutes, and I could hear him typing up a quite reasonable story even we spoke.
Posted by Steven Skiena at 6:23 AM No comments:

Two recent studies have been brought to our attention, both using PageRank on Wikipedia to analyze historical figures. We were previously unaware of them, and it seems of interest to report how these relate to our own work.

In Biographical Social Networks on Wikipedia - A cross-cultural study of links that made history by Aragón, Kaltenbrunner, Laniado, and Volkovich, the authors conduct a study on several graph properties (including in-degree, PageRank, and betweeness) for a large set of people pages. Particularly interesting is the fact that they performed their analysis in 15 major languages, providing a test of how the top ranked figures vary across languages.

These rosters "reveal remarkable similarities between distinct groups of language Wikipedias", which is important in countering a frequent criticism that our English-only analysis results in a grave cultural bias. The differentially ranked figures across different languages are quite interesting, but the take-home lesson is that English-only rankings like ours are more stable than might generally be appreciated.  They also observed the women were apparently underrepresented in Wikipedia: see the article in MIT Technology Review.

The second paper, Highlighting Entanglement of Cultures via Ranking of Multilingual Wikipedia Articles by Eom and Shepelyansky, was published on October 3, 2013, well after our book went to press. They analyze Wikipedia in nine languages, using three measures of network centrality: PageRank (based on in-coming links), CheiRank (based on out-going links), and 2DRank (based on both). PageRank generally resulted in the most informative analysis.

Eom and Shepelyansky are interested in how different cultures evaluate people. By looking at the 30 highest ranked figures of each language, they can identify which historical figures are globally of interest and who are local to particular editions. Generally-speaking, political figures like kings and presidents of nations rank as local heros. By taking a consensus of the figures in the nine languages worth of Wikipedia's, they obtain a global hero ranking. Their top ten are shown below, along with where they appear in our historical ranking:

Another just-published article of theirs,  Time Evolution of Wikipedia Network Ranking, tracks changes in PageRank and other centrality measures in Wikipedia over time.  Finally, in earlier work, they prepared rankings of universities, companies, and several groups of people, including comparisons of PageRank against Hart's ``The 100''.

Obviously the high PageRank figures both teams found in English were exactly the same as we found, modulo minor differences of Wikipedia version number and technical decisions about which pages/links to include. This results in a bit of deja vu as people like Linnaeus, Napoleon, and Elizabeth II rise to uncomfortably high places.

What we see as the major contributions of our work revolve around:

Posted by Steven Skiena at 9:25 AM No comments:

Our View of "The View"

Our book "Who's Bigger" was the topic of a segment today on the popular ABC-TV talk show "The View", starring Whoopi Goldberg (ranked 3728) and Barbara Walters (ranked 7184).   Please check it out: Whoopi's issues with the word "algorithm'' are worth the price of admission. 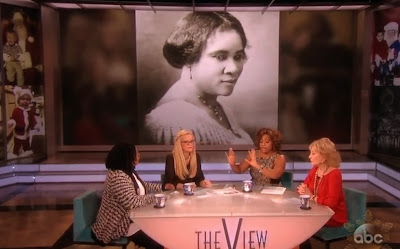 The notion of identifying the ten most significant people in history clearly caught their fancy, but the four all-women hosts and apparently all-women audience were distressed to learn that our top ten list contained all men.   To their credit, the three women they came up with as candidates for our list are exactly the top three women in our rankings: Elizabeth I [13], Queen Victoria [16], and Joan of Arc [95]. Further, they listed them in exactly the right order.  Other candidates they proposed included physicist Marie Curie [667] and the first female self-made millionaire in the United States, Madam C. J. Walker [7730], shown above.

We believe they would be more pleased to hear our results concerning the relative significance of the men and women appearing in Wikipedia, which we write about in ``Who's Bigger''.   Over the past 300 years, the average women in Wikipedia is notably more significant than the average man.  Our results reveal that women required greater accomplishments (analogous to 4 IQ points in the mean) to be recognized than men, up until very recent history.

Posted by Steven Skiena at 8:01 PM No comments:

This week marked the passing of Nelson Mandela, the South African leader who was a beacon for the world.   An article by Paul Brill in the Dutch newspaper Volkskrant included a discussion of our book to ask the question, "How big was Mandela?"

Our methods rank Nelson Mandela at 356, which puts him as the preeminent African leader in history.   We rank him in the same neighborhood of other important nation builders, like Mustafa Kemal Atatürk [360] of Turkey and Giuseppe Garibaldi [352] of Italy, and these seem like proper comparisons to me.

I am fortunate to be able to say I once laid eyes on this man.  During a trip to London, my attempt to visit a cathedral was blocked by a large crowd, waiting patiently.   Mandela was inside, they told me. When he emerged, I was really struck by his presence, his height and erect bearing.   He looked every inch the giant that he was.


Posted by Steven Skiena at 5:34 AM No comments:

Kevin Hartnett of the Boston Globe wrote a nice article about the Who's Bigger methodology for ranking people for the Sunday paper, including a nifty online graphic showing our analysis of painting prices by artist significance.  It gave me a fresh chance to kvetch about the $142.4 million recently paid for the Francis Bacon [3470] triptych, discussed in my previous blog post.

Certain themes are starting to emerge as reviewers get their hands on our book.   In particular, there seems a natural instinct to hunt for people whose rankings offend the reviewer's sense of propriety, with the sense of casting doubt on our methods.  Typically these suspect cases prove to be popular celebrities such as Eminem [823] and Miley Cyrus [2009], both cited in Hartnett's article.

It seems wrong to rate these figures as high as our algorithms do, and indeed my gut instinct is that our rankings of these individuals may be a little too high.  But it should be clear that historically placing contemporary figures is a particularly difficult task.   Reputations are dynamic.  Part of our model is based on the frequency people read Wikipedia pages.   If ten or twenty years from now such interest in these people declines faster than our current model predicts, their rankings will go down.  But today both are among the most famous individuals in the world, and that has to count for something.

Another way to think about this is to look for the rankings of comparable figures.   We rank Mick Jagger at 1055, essentially equivalent to Eminem.  My guess is many readers will not blanch at where our algorithms put the Rolling Stones lead singer. It seems to me that Eminem's cultural significance in his time is grossly analogous to that of Jagger in his.  Miley Cyrus is more of a stretch at her current ranking, but it seems fair to put her somewhere in the child-star league between Shirley Temple [2177] and Annette Funicello [15957].

Further, both are young enough that their full story isn't yet written.  Our analysis of Google Ngrams suggests that people generally reach their peak book-reference frequency around ages 60 to 70.  While this is probably optimistic for most young musicians, it proved to be true for Elvis Presley [69].  Much of what is written about Eminem and Miley Cyrus today could have been said of Elvis in 1960, and yet there are not many figures from the 1950's who will endure with greater historical/cultural significance than the King of Rock and Roll.

Posted by Steven Skiena at 7:55 AM No comments: