Time Magazine has launched an interactive feature ranking colleges by the prominence of the Wikipedia pages of their living graduates.   Harvard appears to be the top dog by this measure, just edging past Stony Brook (which again failed to make its way into the NCAA basketball tournament, the event which inspired Time's feature): 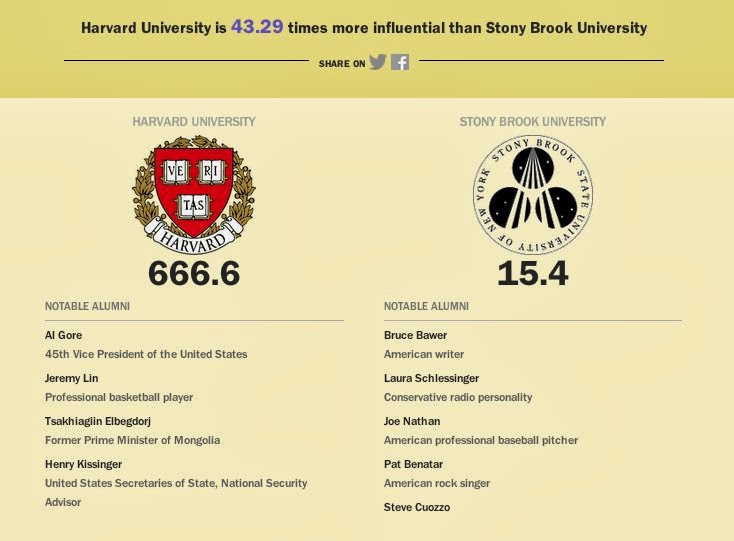 Their ranking methodology includes certain Wikipedia variables analogous to what we have used, including length and links in/out of the page -- which serves as a poor man's version of PageRank.  But PageRank is much better for meaningful notions of importance: links into a page only matter if they are from prominent individuals, and links out have little obvious meaning except that it should be correlated strongly with article length.

The other aspect of such an analysis is properly attributing alumni to schools.   The Wikipedia categories give fairly unreliable annotations, although after checking I can confirm that Pat Benatar in fact did attend Stony Brook for a year before dropping out.  I guess we "hit her with our best shot".

Posted by Steven Skiena at 11:20 AM No comments:


I was reading my Sunday New York Times when my heart skipped a beat.   There in the magazine was an article ``Who's More Famous than Jesus?'' which had to, just had to, be about our Who's Bigger rankings.

Well, it wasn't.  A project at MIT called Pantheon was the source of the article.   Pantheon also uses analysis of Wikipedia data to rank the fame of historical figures.    I will confess to a little sense of Schadenfreude in reading the comments complaining about theie rankings, including:


This all sounded very familiar, because these comments have been made about our rankings as well.

It seems worthwhile to compare our rankings and methodology with that underlying Pantheon.  There are several differences between our approaches to using Wikipedia as a resource:
To their credit, their website is fun to play with and features a host of interesting visualizations.

But how good are the rankings?  It is easy to cherry-pick any set of rankings for things that look weird. They name Rasmus Lerdorf (developer of the programming language PhP, who frankly I had never heard of) among their top 11,000 people, on the strength of being in more than 25 Wikipedia editions (he is actually in 31).  By comparison, we have him as the 51,670th most significant figure.  They rank Justin Bieber at 671 to our 8633, and Johnny Depp at 203 to our 2739, suggesting an over-emphasis of celebrity at the expense of gravitas.

But the right way to compare rankings is through validation measures.   This takes work, but I hope we can do such a study soon.  We will report our results here when we do.

Posted by Steven Skiena at 9:06 AM No comments: