The Biggest Americans (The Atlantic)

Identifying the most historically significant figures in American History is a natural question for our analysis methods.  Indeed, our rankings will be used to fuel a special issue of The Smithsonian magazine this fall on the top figures in American history.  Look for details to come in a future post.

But here we react to a special issue on the 100 most influential figures in American history under the aegis of Ross Douthat, which appeared in the The Atlantic Monthly in December 2006.  Their methodology was based a historian poll, where rankings from ten historians were combined into a single consensus ranking.   This inspires the obvious question of how our top 100 Americans compare to the Atlantic's choices.

To proceed, one must move past the definitional issues of who qualifies as American.  Is an explorer like Columbus American?   A naturalized citizen like Albert Einstein?   Someone born in the U.S. who established themselves elsewhere, like the poet T.S. Eliot?   Our opinions on these matters are, respectively no, yes, and no, to be broadly consistent with the Atlantic.

How did the historians do?   Pretty well, since there is great overlap between our rankings and theirs. Fully fifty of The Atlantic's top 100 rank in our top 100, with another twenty listed in our second hundred candidates. Our top three figures are exactly their top three figures (Lincoln, Washington, and Jefferson), in the same order.  The rank correlation between the orders we rank their top 100 is 0.654, demonstrated by the dot plot below: 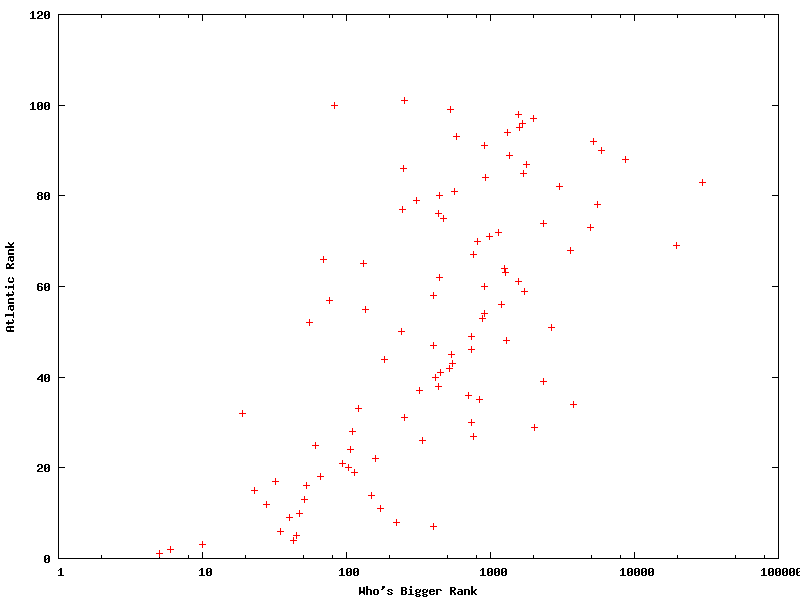 Perhaps the most important difference between our two rankings is how we deal with the Presidents of the United States.   Our rankings put 41 of the 43 men to serve as president in our 100 most significant historical figures (our apologies to Jimmy Carter and Chester Alan Arthur, who just got nosed out).  By contrast, only 17 presidents made the Atlantic's top 100 Americans.

We think this reflects a clear editorial judgement on their part: it seems less interesting for readers when half your list is stuffed with presidents.  Ten of their top 20 Americans were presidents, yet only two of the men ranked 51 to 100 (including Richard Nixon sitting provocatively at 99).   One can hear the summons for diversity and controversy (Ralph Nader?) affecting the historian's better judgement.   My guess is that the historians were confronted with a pre-selected group of figures, who they generally ordered in a sensible manner.

Here are the ten Atlantic figures with the weakest Who's Bigger rankings.  Three are journalist/media figures (Gallup, Bennett, and Lippmann), while three others are scientists (Salk, Watson, and Mead):


By contrast, here are the ten highest ranking Americans missing from the Atlantic:

These might not personally all be my choices for the ten most historically-significant missing Americans.   But I have no doubt that I would put our team ahead of the Atlantic's in any game of Who's Bigger.